Whilst I don’t class myself as an Apple fan-boy I do buy into their platform heavily, mainly due to the fact that I have been burned so many times as an early adopter that I just wanted a phone that not only worked, but that did what it said on the packet, but was reliable. Apple’s products work flawlessly (although not always cutting edge).  I decided late last year that I would buy into the Apple HomeKit eco-system mainly due to having iPads, iPhones, Apple Watch and a 4th Gen Apple TV (that acts as a hub and bridge to the control devices external to the house). Just as Santa was delivering my first shiny and pristine HomeKit compartmental smart socket and a Philips Hue Starter Kit a relative purchased the Amazon Echo. I am not ashamed to say it laid in it’s box for a week whilst I was playing with the HomeKit compatible devices. Then I finally got round to tinkering with the Echo…. what fun!

Calling out “Alexa”….  (you can change  this to Echo or Amazon) enables you to do many things with an Echo that are, in the part are trivial, such as:

to the more useful:

The playing of music (never got round to having a sound system in the kitchen) and controlling of lights is by far the most used features of the Echo and I am surprised at how capable it is at hearing and understanding commands from over 30ft away whilst the TV is on and the kids and making a noise. We can easily control lighting from the lounge even though their is the dining room between us and the Echo. The Echo is constantly having small upgrades, early on in the year you had to use the IFTTT service to turn on a predetermined colour for Hue lamps, now Alexa can do it seamlessly on her own and you can request colours without presetting. Addition of “Skills” (think of as an app for your Echo) allows for integration with other devices such as Plex Media Server where I can ask “Alexa, Ask Plex to play Spongebob the Movie”, a go-to-kid-pleaser!

Now admittedly we lag behind the US for features (but as ever they work extremely well when they come over to this side of the pond). But such features as being able to play the same music multi room synchronicity, texting of voice calling your Echo for reminders and  two way comms between internal and external devices are sure to keep the platform fresh and innovative, as well as giving the rival a real run for their money. I am not afraid to say that it is favoured over using the Siri button on the TV remote or lifting my apple watch for a Siri command – it’s already listening for me and is quicker to react – just as long as I am in ‘ear-shot’ and other family members are not being disruptive (my eldest loves to either beat me to a request, confuse Alexa or countermand me – much to his own amusement).

In relation to learning they show a level of interaction that can be a real advantage to learners (although I don’t fancy taking mine into work just yet!), an always attentive support assistant that can help with definitions of terms, perform calculations, set timers for activities, set reminders, read audiobooks, play music (or audio files), request spelling of word, synonyms and even translate phrases into other languages. These are available right now so who knows what the future might bring?

For a device that’s been available in the UK since the 28th of September 2016 that was fun from the start and has constantly evolved I would recommend a purchase, definitely as a solid entry in home automation and the fact they are heavily discounted on occasion and can be over 30% off. Would I buy another? I can’t see why not, I am just holding out for the expected V2 rumoured to launched later in the year to compete with the impending Apple HomeHub. With improved Audio and styling.

Do you have an Echo or Dot? What do you use your for?

Please note: there is no earth (yellow and green striped cable) show to simplify the diagram

There is a problem with (current) smart switches for lighting:

But there is a potential work-around it the UK ever gets decent Smart Switches that are square but still require a neutral. It seems that October is going to be a popular month for UK Home Automation devices so this post might be very timely.

The diagram at the top of the post show that a live (brown) and switched live (dashed red) are run to the switch
The lower diagram shows where recabling in the ceiling rose is required, then you can fit smart switch to the Live, Neutral and Earth
There are disadvantages to this – you will lose the physical switch at the location but you’re going to get that and more through the Smart functions! 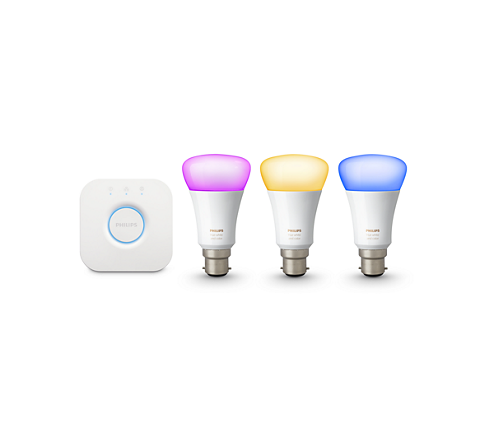 Before we begin let’s start off by stating that the following is my own experience and not a recommendation, also this post is not going to talk all things ‘Hue’ but will focus on the ‘basics’ to get up and running. Firstly you are going to need a bridge (version 2.0 for HomeKit compatibility) this can be purchased separately but can be cheaper if bought as a starter kit – the Hue White and Colour Ambiance kit will effectively give you 3 lamps and a free bridge for instance in either BC or ES fittings, this is where I started and it is certainly fun to mess around with the colour options.

The following lamps, and hub, are your basic options (you can get light strips and desk/floor lamps but we will not be talking about those in this post directly). All devices are Energy Class A+ Rated.

Why did I decide to upgrade to smart lamps? well curiosity and the fact that the E14 lamps I was using were costing me £6 a time and were blowing out at one-a-month and the cost of changing fittings and purchasing lamps would be cost effective – not to discuss the energy savings. Also smart lamps are a cheap and easy way to move into the Smart Home experience. The great thing about Philips Hue is that they are well established, are easy to expand beyond any initial purchase and fall into a number of Smart eco-systems – Amazon Alexa, Apple HomeKit and Google Home. So you can use or move between different control systems should you wish to.

So what lamps should I purchase? well let’s do a quick calculation based on fittings already downstairs:

Burning an astonishing 1111 Watts for all the rooms main lights and table/floor lamps, mainly due to lack of natural lighting lights in the kitchen and utility are on throughout the day, I have now reduced it down to a highly respectable 97W and with utilising the smart abilities of the lighting through timers and sensors this should further reduce costs. The reduction in part was by needing to replace multiple E14/SES up lighter fittings with singular E27/ES downlighters. My cost for lamps ended up being a respectable £300, this may seem a lot but keep in mind the abilities of the smart lamps that I did not have before. I now have three colour floor uplighters in the lounge for those cosy movie nights, three ambience or the lounge ceiling and the rest as white only. We only (currently) really use the coloured Hue’s to set a movie night theme of blue, currently the ambience Hue’s are not fully utilised.

I learnt some important lessons along the way and would recommend based upon my experience:

This year I decided to delve into the world of the Smart Home and although it is relatively well established and there are many great products it is also a time of competition for the  big players that whilst pushing the boundaries that benefits the consumer by creating amazing products but may well hurt the individual in the pocket if they don’t choose wisely (as much as you can) and invest in an ecosystem that may be destined to fail against the competition.  Take for example Belkin’s WeMo Smart Switches , a stand-alone smart socket product in their own right with an App for both Android and iOS devices, they function happily with the Amazon Echo (for those that don’t know the Echo is a hands-free speaker voice controlled speaker that connects to the Google Alexa Voice Service to play music, provide information and control smart devices). Anybody investing in them heavily may have felt that their money may have been spent on the wrong product if they wanted to get involved with Apple’s HomeKit solution (fear not, for it has been recently announced that they are to be compatible through an additional hub). So although you may take a wrong turn, lose-your-footing or lighten-your-wallet or purse upon the journey to a smarter home the future is brighter and evolving all the time, especially from this current year onwards. Over the next year there will be a number of posts connected with the Smart Home and associated devices.

For my own set-up I have a number of considerations:

Of course all of this is likely to have implications upon education – using them in class as virtual tutors? upskilling electricians, engineers or technicians for installation? there is evidence of them creeping into more everyday life (a hotel in the US now has one Amazon Echo in all rooms, over 100, to offer information and ordering facilities as well as comms between rooms. So exciting times ahead.