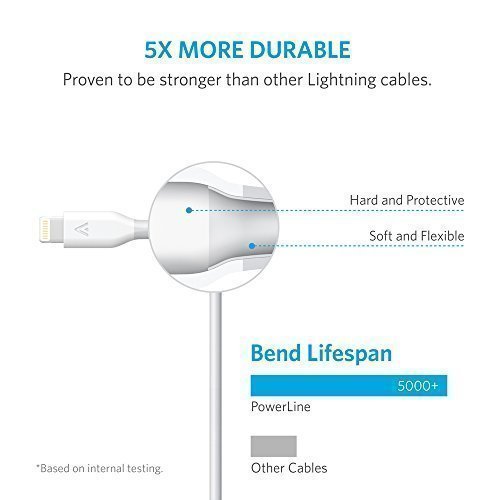 At last I seem to have found a relatively cheap and decent lightning cable, most of the cables I have purchased have lasted a reasonable amount of time but lately the cable are coming away from the plugs themselves (previously Amazon Basics were my go-to cable). So I hunted for a better overall build with Anker again having a product of superior quality, even the feel of the materials stands out once it is out of the box. Purchased for less than £8 at amazon http://www.amazon.co.uk/dp/B013JNAUMW

Although Apple have had a Camera Connection Kit in the past they have not had one included pass-though power that allows for more power hungry devices to work. In the past devices have either not worked or have required all equipment to be all but plugged together with the final connection being the lightning connector to the iPad, often still displaying a warning message.

The USB speed is only supported on the bigger brother iPad Pro and the adapter does not allow pass-through syncing but not only can you use connected cameras to import photos and videos but you can use it with the iPhone 6 as well, allowing you to plug in…

For me this adapter is great, I can now throw my Samson Go Mic, stand and pop filter in a bag along with a powerpack (Anker are my choice) and I can pretty much record anywhere with my iPhone 6 Plus!

I finally got annoyed with having to insert the Headcandy Hesh 2.0 lead in and having to pull it back by about a millimetre due to the extra mic connection not allowing an immediate good connection to the PC/Blue-Yeti. The headphones need a slim plug so I thought I would opt for an Amazon basics lead, as I haven’t been disappointed with any of their own range. The stepped collar is great for iPhone and iPads with cases on and the plug is slim enough (just) to not cause problems with the Hesh 2.0’s.

Cable feels slightly more rubber than plastic and does not tangle. The collar immediately preceding the plug is about 6mm diameter and is about 3mm in depth from plug to silver collar with Amazon basics branding. overall plug length is about 40mm with a solid “bung”to the cable. 1.28m tip to tip.

A recent tablet purchase for my four year old has had many issues with charging. It really does not like substandard charging cables, in-fact it often dislikes its own charging cable and charger, and needs to be shut down fully to enable it to charge. So I really needed a long hi quality cable, to let my four year old use his tablet whilst charging, and affording some measure of freedom for him. tangle-less for the cable and a good quality that will will not play havoc with the charging itself (I also need to replace one for my own work tablet).

I am not fussed about gold connections (how many devices have gold connectors on themselves?) but I did like the slightly tapered micro USB plug, aiding in removal from device. Fit is good (some third parties are either to tight or to loose). How the braiding holds out remains to be seen. I purchased them here http://www.amazon.co.uk/dp/B00FAADBHO

A range of tablets have descended upon the household and yet again I found that I needed to consolidate charging points. This time I wanted a device that was not built directly into the plug as I knew it was going to be plugged in behind a unit that I would not have access to very often and I required at least 5 ports with a number delivery 2A (the more the better). I knew there were units that would cost approximately £20 and I came across another technNet unit (which I was impressed with) for just under £16 – the TeckNet 50W 6-Port USB Wall Charger (10A) . I like the fact that again like my other TeckNet unit it is a compact unit and uses a mains lead that plugs into the back of the unit (the cable even has a Velcro cable tidy incorporated).

The device utilises a BLUETEK™ Technology that optimises the capacity of each USB port dependant  upon demand so no USB port is marked with a specific output and will charge up to the stated 10A. Find it http://www.amazon.co.uk/dp/B00LQTJ2SK

Having recently expanded on the amount of devices in the house and at last count needing 4 charging points by my bedside I decided to invest in a multi USB Plug. I wanted something capable of delivering 2A or more in at least 2 ports. For just under £10 I came across the TeckNet Universal 21W 5V 4.2A 4 USB Port UK Wall Plug. I like the fact that it is a compact unit, and it has certainly done the job for over 2 months. Its just the blue light is very bright and thankfully is tucked behind a unit. the lower 2 ports off 2.1A and the upper ports 1A.

I notice now that this as been superseded by a 24w model that does not included the blue led and has a 2×2 usb cinfiguration rather than a single column of four USB’s and they utilise a BLUETEK™ Technology that optimises the capacity of each USB port dependant  upon demand – find it at http://www.amazon.co.uk/dp/B00K0LBMWE